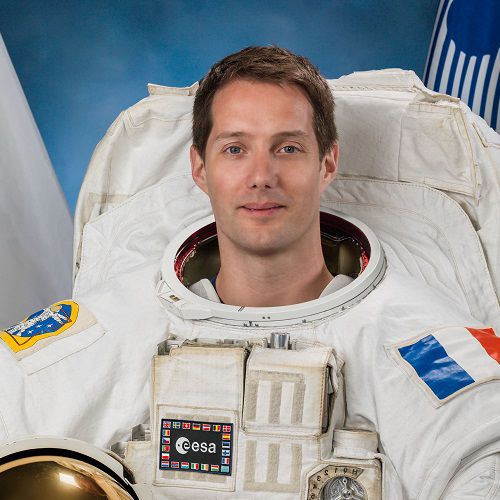 Thomas was selected from among many thousands of candidates as an ESA astronaut in May 2009. In 2014, Thomas was assigned to a long-duration mission (‘Proxima‘) as a flight engineer for Expeditions 50 and 51 on the International Space Station (ISS).

After gaining his master’s degree in spacecraft design and control, Thomas began his career as a satellite and spacecraft engineer working for Thales Alenia Space and the French space agency, CNES. He went on to be selected for Air France’s flight training programme and became a commercial pilot for the airline, logging 2,000+ hours of flying time. During his 197-day stay in space, he took part in over 50 experiments, even setting a record for hours of time spent working on science. Other highlights of his mission included two spacewalks to maintain the Station. Upon Thomas’ return to Earth, he resumed his active duty in the ESA astronaut corps where he is preparing for the future of human spaceflight. To maintain his operational skills, Thomas flies the Airbus A310 parabolic aircraft for space agencies to run experiments in weightlessness. He is set to return to the ISS in the second half of 2021 for another six-month stay. A man of many talents, Thomas is a black belt in judo and enjoys basketball, jogging, swimming, squash and outdoor sports such as mountain biking, kite surfing, sailing, scuba diving, skiing, skydiving and mountaineering. Thomas’ passion for learning has also led him to study six languages: French, English, Spanish, Chinese, German and Russian!